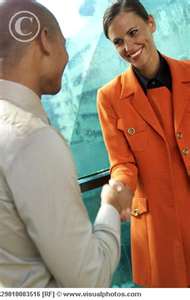 Awhile back I wrote an article on common courtesy in the workplace that stirred up a lot of opinions from my readers.  I just came across their responses while cleaning out some files the other day and thought it would be a good time to re-address this.

I had suggested that our upbringing was a factor in how we treated others.  Although some of the approximately fifty readers who responded thought that was a partial factor, most felt that the environment that much of Corporate America thrives in works counter to being respectful to others.  One stated that he felt that there is such a separation between the leaders and managers with employees, suppliers, etc. that there is an “us versus them” mentality.  The former group crafts the corporate mission statement and posts principles and values on the wall for all to see but do they really follow them?  In other words, do they “walk the talk” and demonstrate to others the organization’s core values or do they sit in their big offices and focus more on how much they are putting in their own pockets?

Needless to say, this economic climate only fuels the ones that feel that common courtesy is a dead art.  The question then remains – can an organization change the culture enough to embrace being true to oneself AND be true to one’s colleagues?

Some other readers also felt that the technology advanced world that we live in needs to be redefined.  Sending e-mails when a recipient is right next door, texting in front of others, etc. has become commonplace and acceptable by most but it does break down the opportunity for effective interpersonal communications.  Many try to blame the younger generations, however, if their role models don’t condone it then why should they stop?  It is up to the leaders to set an example but many don’t.  I was in a meeting recently with a president of a small manufacturing company.  While the human resources person manager was speaking, the president was sending out several texts.  I found it not only rude but inefficient because there was no way that he totally comprehended the conversation because he was trying to multi-task.

I suggest that in the state of flux we seem to living in daily, we should make common courtesy a priority.  By extending oneself, goodwill is created not only for the other person but for the organization on the whole and even for yourself.  It does not take a lot of effort – a “please”, a “thank you” and a “how can I help you” go very far.  As one reader put it “breathe life back into your organization and see how your employees respond; employee performance and engagement is a mirror of how they about the organization.”   Definitely worth trying…

2 thoughts on “Common Courtesy – Does It Still Exist?”