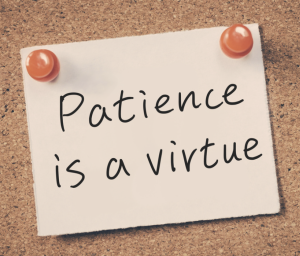 Elon Musk, CEO of Tesla, was quoted as saying “Patience is a virtue, and I’m learning patience. It’s a tough lesson.”

In today’s fast-paced, ever-changing world, it is becoming increasingly difficult to be patient, but the better leaders know that to succeed, you must be patient in most cases.

As an example, when introducing a new product or service research and testing needs to be conducted.

It has been proven time and again that when a company goes quick to market, the end of losing in the long run and their competitors are coming up fast behind them.

With patience, comes the opportunity to investigate other possibilities while still venturing down one path.

The Swiffer is a good example.

Testers were sent to peoples’ homes to figure out a way to utilize the Mr. Clean brand in other ways.

They spent time observing people cleaning and realized that mops were being turned upside with a rag on the floor to clean in corners.

Instead of devising a new use for Mr. Clean, the Swiffer was invented.

If the company had not spent the time conducting this investigation work, this multi-billion business would not have been born.

Although competitors might be the motivator to move quickly, leaders recognize that a lot can be learned by making mistakes and/or taking wrong turns before committing 100% to a new initiative.

In addition, knee jerk reactions usually result in disastrous results that not only affect that particular product or service, but the overall company’s reputation and of course profitability.

Patience is an art and it does take practice.

There are many articles describing how to develop patience but one thing seems clear.

When we are waiting to do something or for something to happen, we feel a loss of control.

This makes most people uncomfortable which no one wants to feel.

When was the last time you were stuck in traffic?

Or a coworker was late with a piece of a project?

How did you feel?

Most likely you felt some anxiety and maybe even fear because you were going to be late to a meeting or miss a deadline.

Surprisingly great leaders feel that way too at times but they have learned to suppress their need to act quickly and instead be patient so they achieve the desired outcome.

The next time you are in a situation where you need to be patient, take a deep breath and realize that it is only temporary.