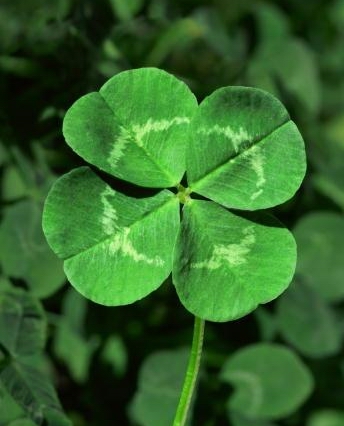 The four leaf clover is associated with luck.  Most people define luck as something that just happens without any reasoning.  In other words, luck is a result of chance.  In reality though, people who are considered lucky actually have forged their own journeys.  They have created a plan and set in it motion.  Did good fortune cross their path along the way?  Maybe but again it is more to do with making smart choices.  I also think it has to do with planting many seeds with the idea that some will germinate quickly, others will take longer, and some will blow away.

By creating SMART goals, you are developing a simple but effective way to achieve your objectives.  The “S” stands for specific.  If you do not clearly define what you are after, how can you achieve it?  This is the issue with New Year’s resolutions.  Many people make statements like “I want a new job” or “I want to lose weight” but they are not specific in exactly what that looks like.  A better goal would be “I want a Finance Director role in a consumer packaged goods company in the Northeast by May”.  This goal identifies the nature of the role, the industry, the location, and the timeframe.

“M” is for measurable.  How can you determine if you are heading in the right direction if you do not have a way to track your progress?  In the example above, it would be important to determine how many contacts you would make and/or how many resumes you send out per day.  By keeping a tracking sheet (I use Excel) you can evaluate what is working or not and adjust your plan accordingly.

The “A” is for attainable and comes from within in my opinion.  You have to give some serious thought to how important it is to achieve this goal.  Others may try to sway you in a different direction or tell you to “completely forget it” so it is up to you to figure out if it is worth the time, resources, and/or risk.  In my case, my father told me he did not see the point of me earning my MBA because once I got married, I would have children and not work.  My reasoning was that my employer was paying for it and it would be a good way to build not only my skills but also my network.  The other issue to take into consideration is what sacrifices are you making in order to fulfill this objective.  Long hours in the library on a summer day was just one thing I had to endure but in the end I was a proud graduate.

“R”/ realistic may be the hardest one to determine early on.   You may have a great idea but turning it into a goal may be something else.  Let’s say you want to write a book which is on many people’s bucket lists.  You have developed a wonderful plot line and even have the title of the book in your head.  However, the reality is that writing a book takes a lot of work and discipline.  Award winning authors dedicate a good portion of each day writing and editing their work.  They also have to be willing to listen to criticism and possibly tweak their story.  Facing rejection and still persevering is another part of the equation.  Many famous authors including Stephen King and J.K. Rowling were turned down by publishers but they kept trying and eventually succeeded.

As mentioned before, “T” or timeliness is an essential component when identifying a goal.  You may want to lose ten pounds in two months but with the holidays right around the corner, it may be too tempting to “go off your diet” when faced with parties and holiday meals.  There may also not be enough time to do your usual exercise routine either.

By utilizing the SMART goal methodology, you will not need to be looking for a four leaf clover in a field of dreams.  Good luck!